Can a Fourth Victory for the Workers’ Party Secure Brazil’s State Capitalism?

Last Sunday, 26th October, Brazilians voted the incumbent Dilma Rousseff, securing the Workers’ Party (PT) its fourth electoral victory. In a very tight race with Aecio Neves of the Brazilian Social Democratic Party (PDSB), Rousseff won by a three per cent margin, indicating the fragility of her victory in what has been considered as one of the most unpredictable electoral race since the return of democracy.

After years of economic prosperity, the patterns of growth are not promising. Can a fourth term for the PT change the fortunes of Brazil? Importantly, what has the PT government achieved in the last ten years? Speculating about Brazil’s future requires us to look back at the country’s political economy since the debt crisis. Above all, we need to recognise both the successes and shortcomings of the PT government to understand the political challenges ahead of the next government.

In 2010, Dilma Rousseff won the presidential elections owing to Lula da Silva’s popularity among the poor. She promised continuity with Lula’s economic and social policies, which cohere around what Luiz Carlos Bresser-Pereira calls ‘new developmentalism’. The key to PT’s electoral legitimacy lies on the return of growth, investment, and greater confidence in Brazilian political economy. Brazil’s trajectory of economic growth, particularly between 2003 and 2009 (see Figure 1), in part draws from the relative capacity of the PT government to manage the commodity boom. Brazil, being a resource-intensive economy, has benefited enormously from high commodity prices for its agricultural exports and other higher valued commodities.

Partly, it was also the increased access of low-income groups to the market, boosting domestic consumption, which should be credited to microfinance. Beyond luck and good timing, policy choices do matter.

In Brazil, policy continuity is key to its economic strategy. Thanks to Fernando Henrique Cardoso‘s Real Plan in 1994, his efforts to bring back macroeconomic stability, to control inflation, and set out a series of liberalization reforms were accompanied by a political consensus around some degree of market reforms. A stable political environment regained the trust of financial institutions and foreign investors.

Under the PT government, Lula’s strategy was to finance domestic companies with the view of making them globally competitive firms. Some examples include the rapid expansion of Brazilian firms operating in Africa and Latin America, notably Petrobras in the global energy industry and Vale in the mining sector. In addition to non-renewable commodities, there is also an emerging market for renewable energy, notably biofuels. As my fieldwork in August 2014 shows, Brazil’s highly successful ethanol programme – initially financed by the state in its early years – is now beginning to find its niche in Africa, where a biofuels revolution is taking place.

What is probably more striking is the clarity of an industrial strategy in Brazil, notably through the Brazilian National Development Bank (BNDES). As my colleague Eliza Massi details in her PhD thesis, the BNDES was instrumental in supporting Brazilian firms during the 1960s and 1970s, and is also indispensible in financing the development of emerging national champions.

In my conversation with Lula’s appointed BNDES President Carlos Lessa, he suggests that the time and tested strategy has always been to build new comparative advantages by forging linkages across sectors and seeking winners that can compete in a globalised economy. My research shows evidence that Brazil’s development strategy is rooted on a pragmatic understanding of market reforms through the selective implementation of liberalisation and deregulation.

Brazil’s record of poverty reduction through its set of social programmes is rather impressive. Social spending as a share of GDP had been increasing since the mid-1980s and several social programs were initiated even during the height of neoliberal reforms under Fernando Cardoso. From 1985 to 2009, social spending almost doubled in percentage terms from about 13.3 percent of GDP in 1985 to 22.8 percent of GDP in 2009. The share of the total population living in condition of extreme poverty fell from about 15 percent in 1999 to 7.27 percent in 2009. Inequality, which had been decreasing slowly along the years as a result of macroeconomic stability and increasing social spending in education, health, and social assistance programs, was accelerated. Increases in minimum wages (in real terms) and expansion of income transfer programs, such as the Bolsa Família program, reduced inequality and allowed the inclusion of millions in the consumer market. As Figure 2 shows, poverty in Brazil was on a steady decline. The Real Plan ended hyperinflation that typically hit the poor hardest. With political stability and modest growth, the PT came to power with an agenda of tackling poverty and inequality without going against the market.

Brazil offers a model of social development that builds upon policy cohesion, political consensus and ideological pragmatism. Continuity of macroeconomic discipline combined with increased social activism provided credibility and popularity to Lula da Silva PT government. Lula’s social policies facilitated the expansion of credit, which had the net effect of increasing consumer spending and expanding aggregate demand. Consistent with this pragmatic approach, the government’s response to the 2008 international financial crisis was the adoption of a countercyclical fiscal policy, with increases in public expenditures, via tax breaks, expansion of social programs, subsidised housing credit, and expansion of credit from the BNDES.

Lula da Silva combined a focus on macroeconomic stability, maintaining policies and objectives inherited from Cardoso, with policies for social and financial inclusion and expansion of the domestic market. To put it simply, Brazil’s innovations in social policy have clearly impacted on market access of low-income groups, but importantly, it provided short-term support for the destitute and the chronic poor in the country.

Figure 2: Percentage of People Living Below the Poverty Line, 1981-2012 Source: IPEA Data 2014 Note: The percentage of the population whose household income is below the domestic poverty line. For further details, see http://www.ipeadata.gov.br/#.

This election revolved around corruption and economic competence of the PT. In the last six months, the image of Petrobras was tainted as a corruption scandal involving state managers, politicians, and some PT members exploded after Paulo Roberto Costa began to confess the overpriced contracts in building refineries in Northeastern Brazil, costing the national oil company at least US$2.67 billion. No longer the engine of Brazil’s prosperity, Petrobras today stands wounded and struggling to recover – its market capitalization has shrunk to $93 billion from $236.5 billion before the end of 2010 when Rousseff took office. Jim Chanos even went as far as saying Petrobras has a bleak future regardless of who sits as president.

Some business groups in the oil industry also blame Rousseff, the company director by virtue of BNDES’ majority voting capital shares, for using the state enterprise as a political tool. Petrobras incurred losses after the PT decided to subsidise fuel for the poor as a counter inflationary measure. 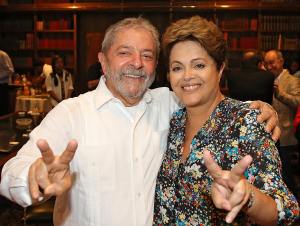 The future of the company is now in question. Foreign investors are concerned about its financial health, and its commercial strategy in doubt if sustainable over the long term. Perhaps more importantly, Petrobras managers are confronted whether their business model remains viable in the face of corruption. Now that economic growth is slowing and the excitement around Brazil’s oil discovery faded, Dilma faces a bigger problem regarding her development strategy. State capitalism in Brazil has always treaded the difficult balance between state intervention and freedom for the private sector. Oftentimes, excessive intervention has backfired – one simply needs to look at Venezuela as an extreme case of political intervention. The challenge is whether Brazil’s brand of state capitalism – however stable and moderate compared to other radical Left governments in Latin America – can secure sustainable growth through industrialisation whilst delivering social development for the poor.