In a recent guest lecture that I gave at York University, I presented some very rough ideas about how we can think about resource exploitation and democratisation in Latin America and Southeast Asia. Whilst by no means do I suggest such cross-regional comparisons are unproblematic, I argued that there are common grounds for some comparative work to understand how national elites in the middle and low-income countries attempt to contain political conflicts. This in turn can potentially enable a new wave of scholarship to focus on the distinctive patterns of state-society relations, how political systems influence conflict, and whether resource exploitation can produce more democratic outcomes. I have subsequently suggested that we should perhaps draw more systematically from contentious politics literature pioneered by Charles Tilly and Sid Tarrow to be able to probe into how states and social groups negotiate political choices – and subsequently – institutional arrangements. In other words, we need to think more creatively about the role of politics and contingency in crafting political pacts. This is especially important in the case of mining countries which are facing multiple challenges from below – conflicts based on ethnicity, race, class, among other cleavages – and where the future of resource extraction is uncertain as a result of social mobilisation against mining-led development.

This research agenda really began after doing some field work in Brazil, Chile and the Philippines, which appear to share some patterns in terms of how challenges from below are reshaping the governance arrangements in mining and oil industries. What is striking is that in many resource rich regions, the developmental consensus around resource-based growth is waning if not already unravelling. Even in Left-led governments in South America, notably Bolivia, Ecuador, and Venezuela, the progressive redistributive agenda through the direct transfer of natural resource wealth into social development is in danger of being halted. More importantly, disappointments to the Left by social movements have led to increasing tensions between states and social groups. Whilst during the neoliberal era, the conflicts are concentrated between MNCs and local communities, the new wave of contention has produced conflicts between states and social movements as well as within civil society itself. Hence, political conflicts are taking an interesting turn. It is not as simple as state vs markets. Nor is it about MNCs vs marginalised communities. These changing dynamics of conflicts mean that we need new conceptual tools to understand how change takes place, and whether these challenges from below are producing more democratic outcomes or whether states end up resorting to political violence.

By contrast, new mining producers in Asia – notably Mongolia, Laos, Papua New Guinea, Myanmar, the Philippines and Timor Leste – are now envisaging their resources as the new engine of growth. Given the proximity of the Chinese market, Asian states are containing political conflicts – sometimes through the use of overt political violence – in ways that can hasten the development of large scale extraction. Consequently, political opposition to mining as a poverty reduction strategy tends to be muted, and this becomes even clearer when one looks at the scale of extraction which are about to take place in these new mining regions.

In order to understand how social groups negotiate, and sometimes challenge, the dominant paradigm in mining governance, one needs to go back to state power and the ways power is reshaped by these social groups. As Tilly’s book Regimes and Repertoires compellingly argue, regimes and political systems are crucial variables that determine the political opportunity structures for mobilisation and collective action. This, in turn, can open the blackbox of resource explotiation-democratisation nexus. Put differently, power and politics must be taken into account more seriously if one wants to understand how political change takes place in the Global South. 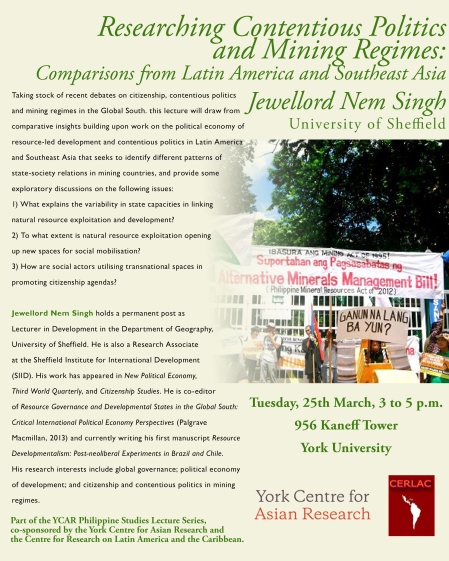